You are here: Home / Christmas / Christmas at Gaylord Palms Sounds of the Season Concert Series
Tweet

Christmas at Gaylord Palms again will welcome award-winning voice talent to spread holiday cheer with the return of its Sounds of the Season Concert Series presented by Celebration Golf Club. A variety of musical styles including Grammy® Award winner Sandi Patty and internationally-known a cappella group Voctave infuse the best of Christmas music into the fun spread throughout the resort. All performances will be onstage in the grand St. Augustine Atrium and will include a special concert patron-exclusive visit to the resort’s popular ICE! attraction after the performance. The six Sounds of the Season concerts will be held on select nights in the month of the December.

We love visiting Christmas at Gaylord Palms when we are in Orlando! This year’s Sounds of the Season Concert Series has me wishing we lived closer! It is a lifelong dream of mine to see Sandi Patty give a Christmas concert! I’m also a fan of Voctave and VoicePlay. Holidays in Hollywood and 4eva29 have me interested too. If you are in central Florida in December make sure you check out Christmas at Gaylord Palms, you won’t be disappointed. 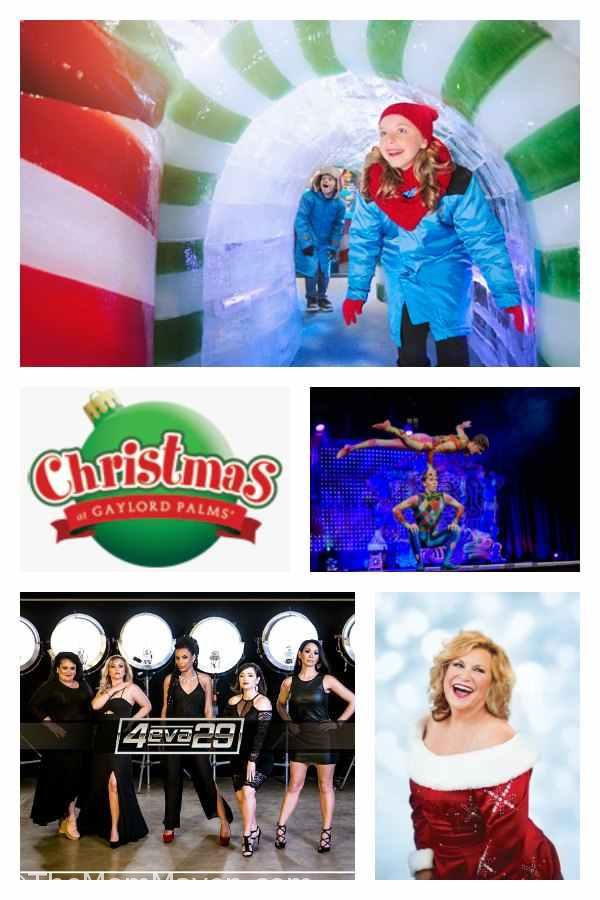 The performances featured during the Sounds of the Season Concert Series include:

As one of the most highly acclaimed performers of our time with ﬁve Grammy® awards, four Billboard Music Awards, three platinum records, ﬁve gold records, and eleven million units sold, Sandi Patty is simply known as “The Voice.” Sandi is the most awarded female vocalist in contemporary gospel music history, with 40 Dove Awards, and is a member of the Gospel Music Hall of Fame. Patty has released a number of Christmas albums over the years, including “Christmas Blessings” in 2014.

Deejay Young got his musical start at the young age of five on the National Tour of the hit Gospel-theatrical stage play, “Daddy Please Don’t Leave.” He continued performing, mastering his skills as a vocalist and songwriter. Young has performed at many prestigious and historic venues across the world, including Radio City Music Hall. His latest project and debut holiday album, “An Unplugged Christmas,” was an Amazon Music Top Holiday Album seller upon its release.

Voctave is an 11-member a cappella group from the Central Florida area. Formed in the winter of 2015, the voices that bring their artistic arrangements to life represent a wealth of diverse backgrounds and musical experiences. Group members have professional roots with Walt Disney World entertainment, but their range does not stop there. From gospel music to musical theater, contemporary Christian to barbershop, pop music to choral specialists, Voctave voices have covered it all both in and out of the a cappella realm. Members of Voctave have performed all over the world and can be heard on countless recordings. With multiple #1 songs and albums on iTunes, Amazon and Spotify, Voctave has also ranked in the top 25 on Billboard Magazine’s charts.

Enjoy the seasonal sounds of the silver screen with this concert featuring Christmas songs from classic holiday films performed by some of Central Florida’s most talented and diverse vocalists. These singers have performed all over the world and will leave attendees in awe of their unique voices.

Originally a girl group named “FLIRT” in the 90s, these five powerful female vocalists have made a comeback as pop-star moms, having performed on Broadway, in Las Vegas, and at Walt Disney World. 4eva29 creates a hilarious one-of-a kind concert experience. In their special performance at Gaylord Palms, these fiercely hilarious ladies will put their own spin on holiday classics like “Jingle Bells”, “Santa Baby”, and of course, Mariah Carey’s “All I want for Christmas is You.”

Locally based and internationally known, VoicePlay introduced their unique sounds to the world on Season 4 of NBC’s “The Sing-Off.” VoicePlay creates a total theatrical experience as their full stage show presents amazing, humorous, and vertigo-inducing harmonies with their music-without-music sound, bouncing between eras and styles plus mixing in inventive and often hilarious on-stage theatrics.

Concert Series tickets are now on sale online at www.ChristmasAtGaylordPalms.com/SoundsOfTheSeason.

The Sounds of the Season Concert Series is an ideal complement to the holiday activities available during Christmas at Gaylord Palms. The resort’s signature attraction is ICE!, an experience created by artisans from Harbin, China, home of the world’s largest ice and snow sculpture festival, who carve more than two million pounds of colorful ice into larger-than-life sculptures. This year, ICE! features “A CHRISTMAS STORY™,” which has been a staple of holiday movie lists for years! Guests can experience this holiday favorite in a whole new way as the hilarious family tale will come to life through hand-carved ice sculptures and displays, inviting guests to relive the film’s iconic scenes such as The Old Man’s Major Award, Aunt Clara’s pink nightmare and the ultimate triple dog dare at the school’s flagpole, and many more!

From the ICE! attraction to snow tubing lanes, from live shows and concerts to holiday dining, the Christmas season at Gaylord Palms is chock full of endless entertainment. Learn more about the resort’s holiday happenings at ChristmasAtGaylordPalms.com and stay connected by following @GaylordPalms on Facebook, Twitter and Instagram.