2014 marks the 50th Anniversary of the Buffalo Wing – a momentous occasion sure to be celebrated by sports fans and foodies alike. First created in Buffalo, NY in 1964, the original recipe was as simple as combining Frank’s® RedHot® sauce and melted butter. As the history books tell it, wings were seen as a culinary cast-off at the time and Buffalo wing sauce was created in a pinch to stave off the hunger of some late night revelers stopping by a neighborhood tavern. But fifty years later, this secret sauce still exhibits a flavor profile that continues to take the country by storm. It’s one for the history books: the lowly Buffalo Wing catapulted from basic pub grub to menu mainstay, all across America.

With more than 1.25 billion wings served and consumed during Super Bowl weekend and totaling more than 100 million pounds of wings overall*, your sure to find a big platter of wings at your game day celebration. So celebrate the Big Game and the anniversary of wings with Frank’s RedHot. Some things may have changed over fifty years, but one thing that hasn’t: the secret to authentic Buffalo flavor can only be achieved with Frank’s RedHot, THE secret ingredient in the original Buffalo wing sauce recipe. 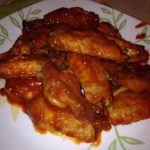 I hope you enjoy this recipe and all of the easy recipes I share here on The Mom Maven. I hope you share them on your social networks. I just ask that you not copy and share the entire recipe with photos. Please use the sharing buttons below and share the link to this post. Thanks!