It’s just been in the last year or so that I have begun to like cheesecake. I was just never a fan of the dessert. I remember arriving at my sister-in-law’s wedding reception years ago and finding nothing but cheesecake on the cake table and being very disappointed. 🙁 Anyway to date my favorite cheesecake was a Red Velvet Cheesecake sample from The Cheesecake Factory that I had at Sam’s at one of their holiday events almost 2 years ago.

I know I like flavored cheesecakes more than I do plain cheesecakes with fruit toppings so that is what I usually gravitate to. I have collected a few delicious sounding cheesecake recipes on my Tasty Treats Pinterest board so I decided it was time to give cheesecake a try. First, I needed to get a springform pan. A friend of mine was having a Pampered Chef party so I got my pan from there. It comes with a glass bottom and is a really nice pan. Then I had to decide which recipe to tackle first. I chose the Brownie Sundae Cheesecake from Justapinch.com. 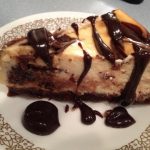 We served ours with additional hot fudge sauce drizzled over the cheesecake. I brought the cheesecake to my small group where it was met with wonderful reviews. On Monday I brought a piece to my Pastor, who is a great cook himself, and he said it was wonderful. I brought the rest of it to work on Thursday where it was gobbled down and I was told I could make it for them every week! So, I guess it was a hit. This was my first ever cheesecake and I have heard so many stories about how hard it is to make cheesecake so I am doubly proud of this success.

Do you like cheesecake? Do you make cheesecake? What is your favorite kind of cheesecake? Leave me a comment and let’s talk cheesecake. Make sure you share this recipe on your Easy Recipes Pinterest board!