You are here: Home / Life Happens / Where are My Keys?
Tweet

Day 5 of the Blog Dare is…Something Lost or for me, “Where are My Keys?”
Back in October when hubby and I left for our 20th anniversary Caribbean cruise, departure day was a little crazy. Our cruise was a Sunday-Sunday cruise. All of us are in leadership at our church and I am on staff so missing 2 Sundays in a row is not an easy thing to do. My husband is the A/V director and currently his only back up is our 18 year old son-who is also the worship drummer. Anyway, before heading to church we loaded my van with our luggage. Ron and Aaron left at 7:45am in Ron’s truck like normal. I don’t have to be at church til 8:40 so I spent a little time double checking everything around the house before heading off to church.

We left church right after the worship set, Aaron’s friend came to run sound for the remainder of the service. We swung by the house to drop Ron’s truck off. I went in the house and put my church keys on the hook since I wouldn’t be needing them on our cruise. We settled in the van and drove to the Port of Tampa. Ron was driving using his keys so I put my van/house keys in the cup holder and asked Aaron to bring them in the house when he got home. 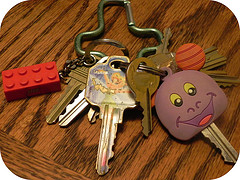 One week later we got home from our cruise and as I prepared for work on Monday, I went to the key rack and my car keys weren’t there. I asked Aaron where they were and he said he hasn’t seen them. I asked if they were still in the cup holder and he doesn’t know what I’m talking about! Luckily hubby was home with his keys and we looked in the van but my keys were nowhere to be found. We’ve torn the van and the house apart but here is is January 10th 3 months to the day since I realized my keys were missing…and they are still gone!